This class discusses the circuit design and implementation of the LED cube.

The LED cube uses an Arduino (or more generally, a microcontroller) to control its LEDs. The Arduino’s pins can output a 1 (5V) or a 0 (0V). These must be used to drive the LEDs. The first consideration should be, how will the Arduino interface with the cube’s LEDs? The intuitive solution is to connect a single LED in the cube to a single pin on the Arduino. This way, each LED will be addressable by the Arduino. However, we are limited in how many Arduino pins we have access to. For the Nano, we have around 15. This is clearly not suitable for a cube of size greater than 3. So we must do better. 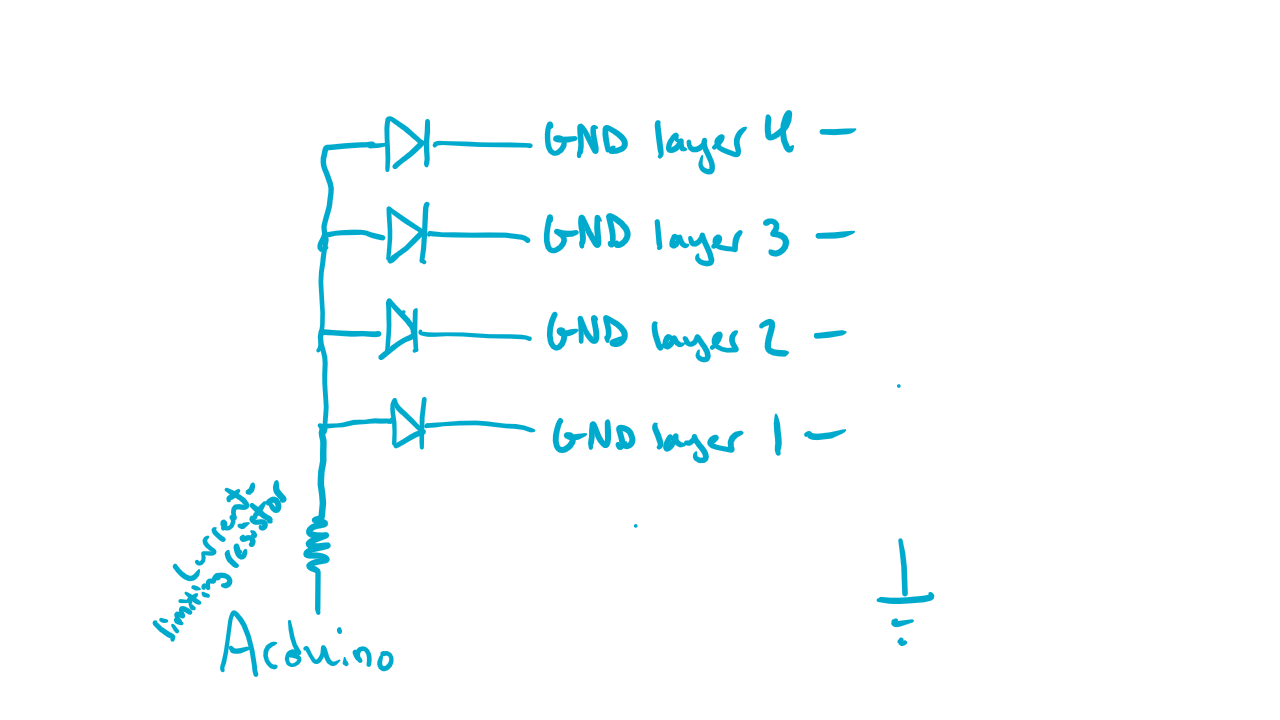 By selecting which GND layer is connected to the main circuit’s GND, we can effectively select which LED becomes enabled. In this way, we can control all 64 LEDs with only 16 inputs, and a way to select the appropriate GND layer to enable. It must be noted that only one layer can be enabled at a time. If more than one layer is active, unwanted LEDs will be enabled due to the fact that all positive terminals are connected vertically. The process for enabling LEDs is as follows:

This process can be repeated for each layer. Remember that we only need to enable the corresponding LEDs on the bottom layer, because LED positive terminals are connected vertically. As long as the correct GND layer is active, the LEDs will display on the correct layer. This raises the question, how do I enable LEDs on two different layers at the same time? Well we can simply iterate through the layers, loading a new configuration for each layer, at a high enough frequency that all of the layers appear to be active simultaneously.

However, this still requires 16 pins plus a mechanism to control the active GND layer. We can still do better. A shift register is employed to manage this task. The shift register used for this project has 1 main input, and 8 main outputs. A shift register takes a series of binary numbers and shifts them through its outputs at every clock cycle. In other words, it takes a serial input and turns it in to a parallel output. In addition, we can connect the last output of one shift register to the input of a second shift register (effectively connecting them in series) to double the amount of bits it can hold. By doing so, we have a 16 bit shift register. 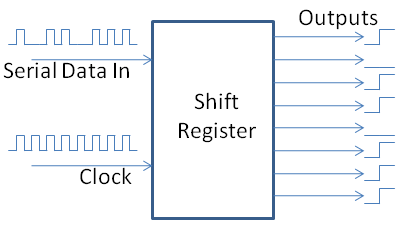 This covers the circuit description. To reiterate, the display process works as follows.

This process is happening very quickly, similar to a computer display refreshing. This gives the illusion that all LEDs can operate independently. Here is an overview of the circuit schematic with the components annotated.